That said, I did do considerably better with writing physically, using my moleskins/bullet journals. One frustrating thing about physical media is it’s nowhere nearly as searchable as the digital outlets I use (or used)… so finding stuff is suboptimal… so, this year I hope to do more of my writing here. However, some, if not many, of my posts will be set to private… created purely for my own personal record of life’s happening… like the moleskin entries, but searchable.

Anyway, my first post for 2022 isn’t a private one… it’s a photo I took with my new(ish) Pixel 6, and a paragraph to mark the occasion of me teaching the boys (the younger 2) how to mow the lawn. They’re 16 and 14 and this is a lesson that’s somewhat overdue, perhaps… but with their asthma and allergies… anyway… their first attempts went well. One mowed the front yard, the other the back, and I just instructed and supervised. And, as a result, the lawns are mowed without me needing to visit the physio afterwards… getting old sucks.

Mid-terms elections here in the US today, and I had to capture some of the local election campaign signs before they disappear. They’ve been up for AGES, and I’ve been meaning to take a photo of a few but have been too busy or slack to do so until now, the last minute.

Much like these photos, I’ve had the intention to blog about the experience of living in the US for some time, but been too slack. Honestly, there’s always something else that has taken priority over blogging, so it’s not entirely due to slackness.

Anyway, that all changes now, as I kill two birds with one stone today, taking these election sign photos and blogging about them… and hopefully, it will start the blogging ball rolling and I make good on my promise (to myself) to post a regular update on the positives and negatives of living in the US.

But that’s for another day… now, back to these Mid-Term Election campaign signs.

END_OF_DOCUMENT_TOKEN_TO_BE_REPLACED

Over six years ago, I posted a design history of the evolutions/changes that had taken place over the previous five-and-a-half years. Time to post an update.

Unlike the last design history post, I’ve stuck with the WordPress for the past six years, and stuck with the one domain… the information below shows what has changes though.

First Post: 31st of May, 2006
Last Post: 4th of July, 2007
Comment: This design was a tiny tweak of Fredrik Fahlstad’s fSpring theme. It was not a major deviation from the tweaked Kubrik theme that came before it… a little more polished and less common definitely, but had too much in common with its predecessor, so lasted little over a year before I abandoned it for something fresher and more customised.

First Post: 25th of September, 2007
Last Post: 29th of February, 2012
Comment: This design was a heavily modified version of the 4u by utombox, which was itself based on the much used and modified Hemingway theme.

This theme underwent some minor tweaks here and there on it’s time on this site, but is to-date the most long lasting of all the themes that I’ve used here… four-and-a-half years.

That brings us to the current design ((First Post: 24th of March 2012)), YAMINTH which is a wonderful, fresh and minimalist design that is well suited to what this site has become of late, i.e. basically a photoblog with the occasional traditional-type blog… only time will tell how long it lasts here, but I expect it will be a stayer. 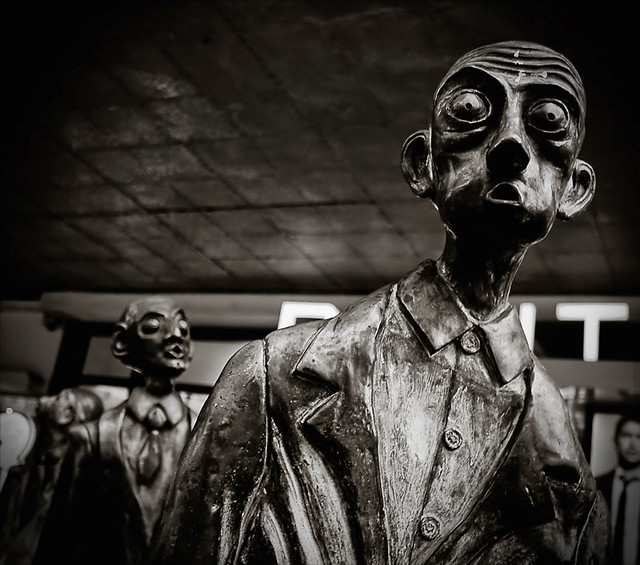 Some might describe The Frying Dutchman as one of the greatest unsigned bands doing the indie scene back in 1995, but they’re probably former members and most definitely lying.

Anyway, some time ago I got a Tevion “USB Hi-Speed DVD Maker” from Aldi and on the weekend I finally managed to make the stupid thing work thanks to some freeware I downloaded off the net. The software that came with wouldn’t record squat.

So, here’s six-and-a-half minutes of The Frying Dutchman’s one and only performance, live at the Punters Club back in 1995 as part of the RMIT heats for the National Campus Band Competition… that year Jebediah took out national honours.

The Frying Dutchman – Live at the Punters Club – 1995 from kekoc on Vimeo.